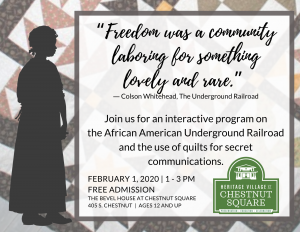 The Underground Railroad was a network of secret routes and safe houses established in the United States during the early to mid-19 century, and used by enslaved African-Americans to escape into free states and Canada. The scheme was assisted by abolitionists and others sympathetic to the cause of the escapees.

Join us in the Bevel House, 405 S. Chestnut Street as we explore how quilts were used as communication devices along the route to freedom.